The magnificent temples at Abu Simbel

The magnificent temples at Abu Simbel 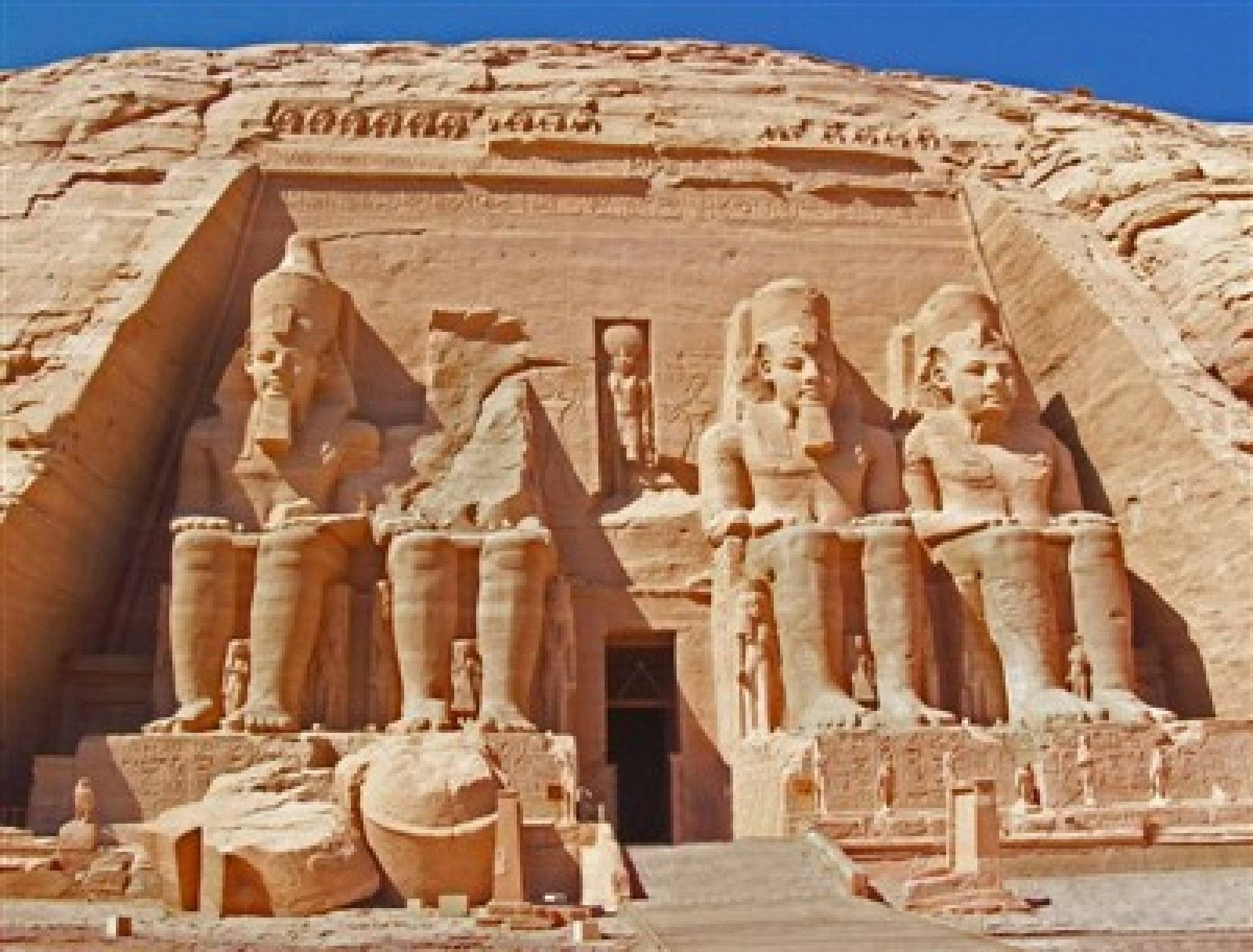 ABU SIMBEL A site in Egypt where Ramses the Great (Ramses II) (1304–1237 B.C) carved a pair of rock-cut temples. Situated on the west bank of the Nile at Egypt’s southern border, Abu Simbel lies 180 miles south of Aswan. The larger of the two temples, the Great Temple, Hwt Ramesses Meryamun, called the Temple of Ramses Beloved of Amun, is dedicated to Egypt’s principal gods: Amun-Re, Rehorakhty, Ptah, and the deified Ramses. The walls of the Great Temple are decorated with religious scenes, including an array of gods and goddesses, and scenes of Ramses’s most important battles—the most well-known being the Battle of Kadesh, which depicts Ramses’s victory over the Hittites.

The most impressive parts of the temple are four 67-foot-tall seated statues of Ramses that occupy the open-air court in front of the entrance to the temple. Each one was carved from the rock face of the mountain. (It has been suggested that Mount Rushmore in South Dakota was based on these figures of Ramses.) One of the statues (on the left as you face the temple) was damaged by an earthquake in antiquity, and the head lies on the ground. Carved on the sides of each throne are Nile gods tying lotus and papyrus plants around the hieroglyph “to unite,” symbolizing the unification of Upper and Lower Egypt. Statues of the royal family are carved between and beside the legs of all four colossal statues of Ramses. Prominently shown around the first southern statue are Queen Nefertari (the Great Wife), Muttuya (king’s mother), and Prince Amen-hir-keep-shelf (the firstborn son). From the second southern statue are: Princess Bint-Anat, Princess Nebet-away-by, and a female figure whose name has been lost, perhaps Esenofre, a minor wife. The family members shown with the two northern statues are Queen Nefertari, Princess Beket-mut, Prince Pi-Ramses, Princess Merit-Amun, Queen Muttuya, and Princess Nefertari. Beneath the statues are figures of bound captives, and above the entrance to the Great Temple is a carving of the sun god Rehorakhty. To his right is a jackal-head symbol meaning “power”; to the left is Maat, the goddess of truth. Together the three symbols form an ancient Egyptian pun: they spell one of Ramses’s names, User-Maat-Re, “the Truth of Re is Power.” In front of the Great Temple were two stone basins where the priests purified themselves with Nile water before entering the temple.

The Great Temple has four rooms: The first, called the great hall, has eight square pillars each with a statue of Ramses. The four on the right wear the double crown, signifying the unification of Upper and Lower Egypt, and those on the left wear the white crown of Upper Egypt. In the second half, the four pillars are decorated with religious scenes—the king in the company of the gods: Anubis, Satis, Min, Mut, Wadjet, Amun-Re, Hathor, Montu, and several manifestations of Horus. At the entrance to the vestibule, the king makes offerings of wine, incense, bread, and flowers to the gods. The vestibule leads to the sanctuary, where statues of the gods are cut into the rock. From left to right are Ptah, Amun-Re, Ramses II (as a god), and Re-Horakhty. The image of Ramses is the same size as those of the gods, suggesting he is the equal of the gods he is honoring. The holy of holies at Abu Simbel is oriented so that on February 21 (Ramses’s birthday) and October 21 (Ramses’s coronation date), the rays of the sun shine through the corridor into the sanctuary and illuminate Ramses and the gods.

Just north of Ramses’s temple is the Small Temple, built for Queen Nefertari, and dedicated to Hathor as Abshek, an obscure Nubian goddess of love and beauty. The front of Nefertari’s temple is shaped like a pylon and faced with six colossal statues: four of Ramses and two of Nefertari, each about 33 feet tall. An inscription over the door reads:

Rameses II, he has made a temple, excavated in the mountain, of eternal workmanship, for the chief queen Nefertari, beloved of Mut, in Nubia, forever and ever, Nefertari for whose sake the very sun does shine.

Inside, the great hall is supported by six Hathor-head columns that incorporate the shape of the sistrum, the sacred rattle used in religious ceremonies. In the vestibule, or second room, are religious scenes with Nefertari in the company of goddesses. On the right of the main vestibule door, Hathor-Abshek looks on as Isis places a crown upon Nefertari’s head. On the left side of the vestibule door, Nefertari stands with Ramses, who presents a bouquet to Tauren, the goddess of pregnancy and childbirth. The third room, the Holy of Holies, where the cult statues were kept, is decorated with various goddesses. One wall is carved to show Hathor as a cow goddess emerging from a mountain to protect the king, who stands in front of her.

On the side walls, Ramses and Nefertari appear in the company of the gods with Ramses offering incense and libations to himself and his queen, indicating that they are both deified. The temples at Abu Simbel are unique because they were carved from a mountain, not built of stone blocks. When the Aswan High Dam was being constructed in the 1960s, both temples were saved from the rising water that formed Lake Nasr behind the dam. UNESCO, the United Nations Educational, Scientific and Cultural Organization, and the Egyptian government dismantled the temples, cut the facades into blocks, numbered them, and moved them to higher ground. The reassembled temples were carefully placed so the sun still shines into the holy of holies on February 21 and October 21, just as in ancient times. 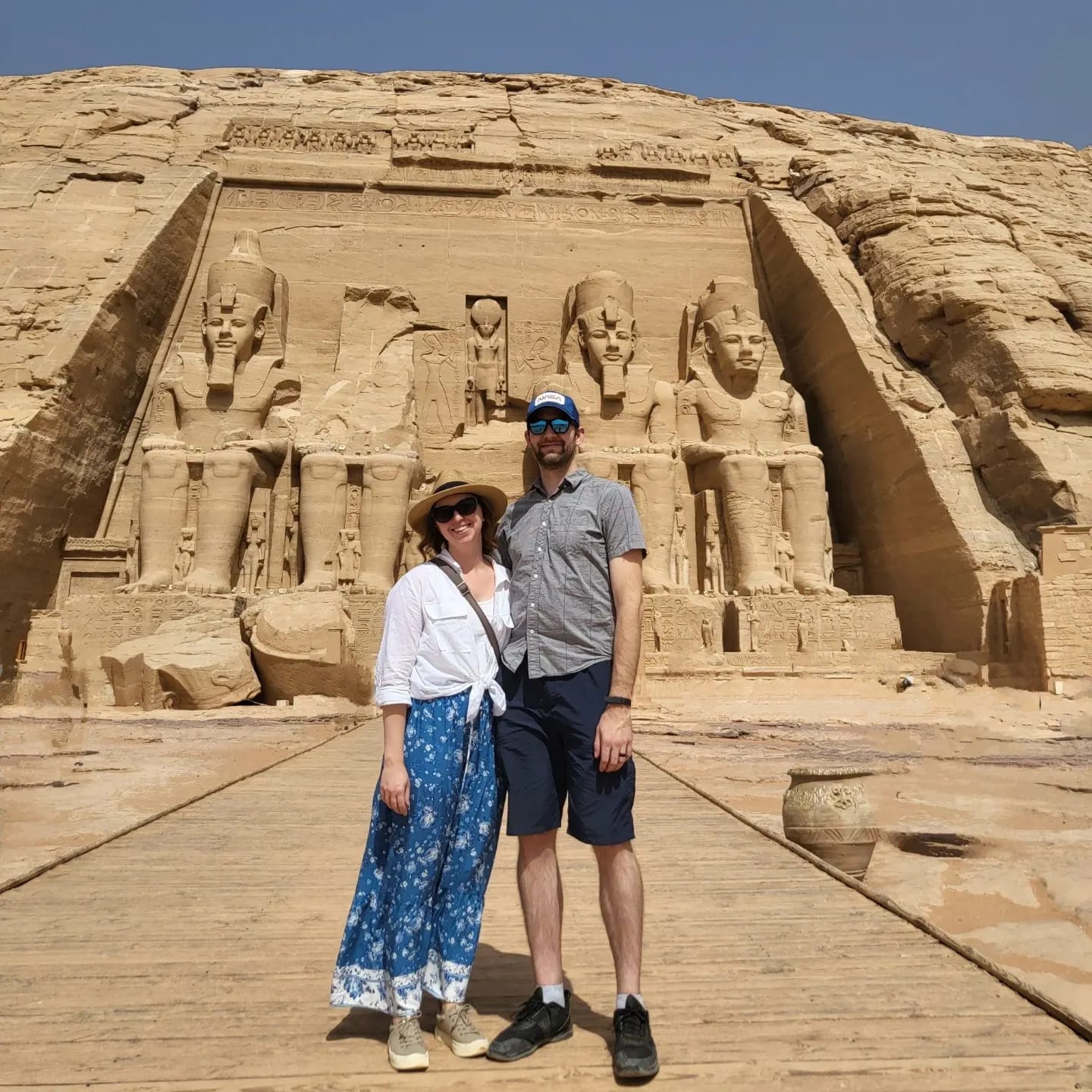 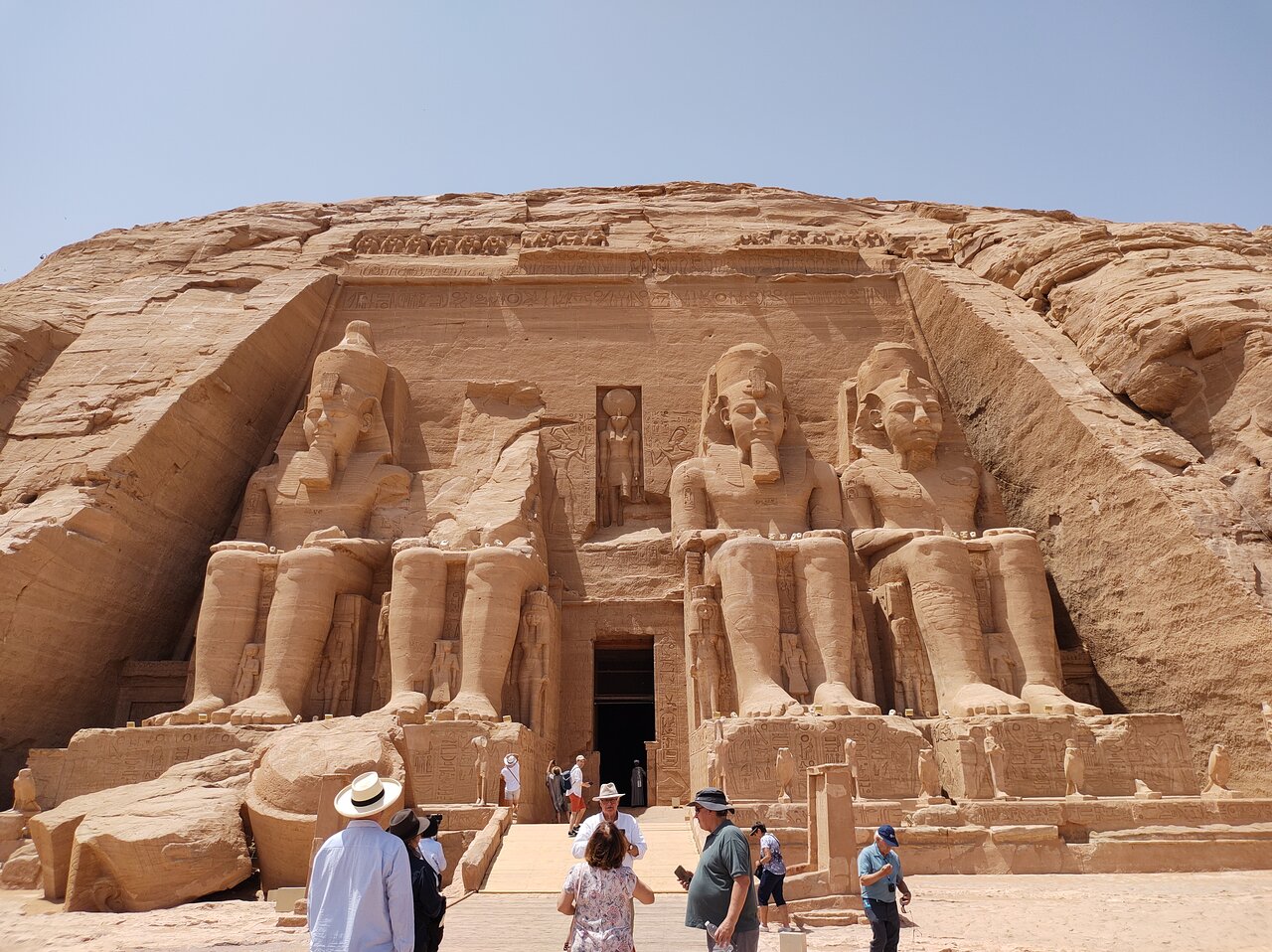 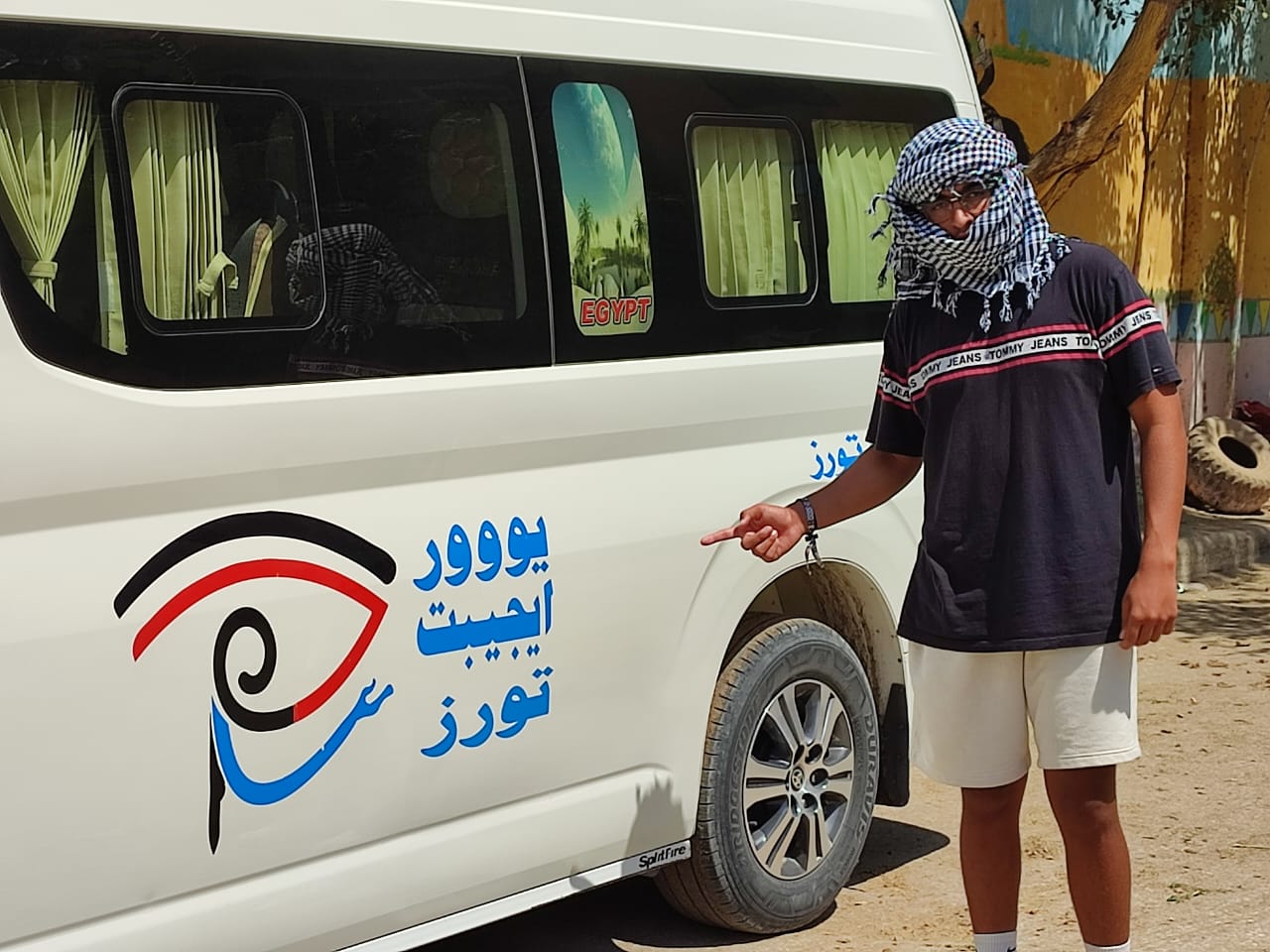 Trip to Abu Simbel by car