Second, mythology tells us that Anubis embalmed OSIRIS and was the protector of the god’s body during and after the embalming. Anubis’s most important role is to prepare the mummy for its journey to the NETHERWORLD.

Third, Anubis is the guardian of the mummy in his or her tomb. Images of Anubis are prominent in the tomb of Tutankhamen. When the British Egyptologist Howard Carter opened Tutankhamen’s tomb in 1922, he found the storeroom packed with magical items that the king would need in the next world. Between the paws of a statue of Anubis facing west was a magical reed torch with a brick stand that had a small hole in the middle in which the reed could be placed. Scratched on the brick was the ominous spell:

It is I who hinder the sand from choking the sacred chamber,

and who repel he would repel him with

the desert flames. I have set aflame the desert(?),

I have caused the path to be mistaken. I am for the protection of  Osiris.

It was the duty of Anubis to guard this room, which in ancient times was called the “Treasury of the Innermost.” Anubis was perched on a shrine that had several compartments, each of which held funerary objects, including four blue faience forelegs of a bovine animal and two wooden amulets in the shape of a  mummy.

Different myths claim different gods as the parents of Anubis. One myth says his mother was NEPHTHYS and his father was Osiris; in other myths, his father was SET. The Greek writer Plutarch wrote that Anubis was the son of Osiris and ISIS. Plutarch also 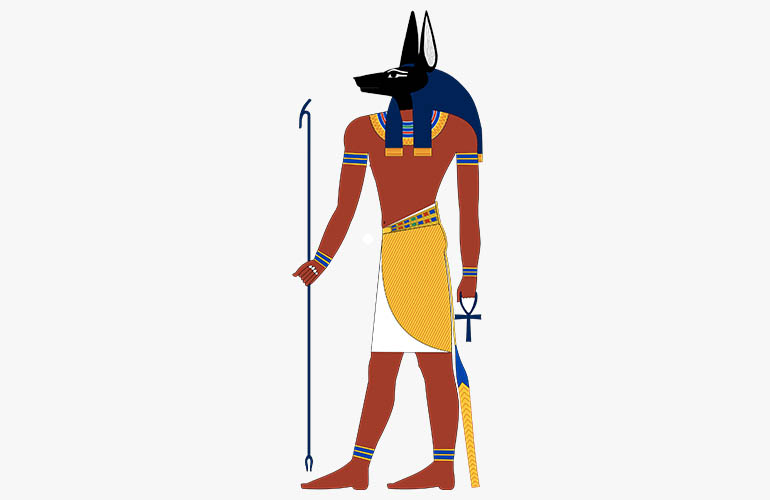 noted that the dog (Anubis) “. . . is equally watchful by day and by night, making him a good guardian.”

Anubis’s home was the cemetery, and his most important duty was to preside over embalming and mummification. Anubis is said to have mummified Osiris and wrapped his body in fine linen bandages woven by the sisters Isis and Nephthys. Tomb paintings show him attending the mummy in the tomb, placing his hands on the mummy, and saying, “I have come to protect Osiris,” for every mummified body was associated with Osiris, the god of the dead. Other scenes show Anubis offering the heart to the mummy in its coffin so the body will be complete when it reaches the Netherworld. In actual mummifications, a priest wearing a jackal-head mask played the part of Anubis.

Anubis is mentioned in several mythological texts. In the BOOK OF THE DEAD, he is shown in the vignettes or illustrations attending the weighing of the heart ceremony in the Hall of the Two Truths. Anubis stands next to the scale where the heart of the mummy is weighed to make sure it is as light as the feather of truth; if so, he will prepare the deceased for immortality while THOTH stands ready to record the decision. In the BOOK OF CAVERNS, Anubis first wraps the head of the deceased king, placing linen strips on the face of the mummy to support and preserve it. It is Anubis who prevents the corpse from decaying by anointing the mummy with sacred oils and fragrant incense. The seven magical unguents used in embalming were also used in daily life. They were called festival perfume, Hekenu oil, Syrian balsam, Nechenem salve, anointing oil, best cedar oil, and best Libyan oil.

Anubis’s several titles acknowledged his varying roles as the god of mummification:

Tepy-du-ef, “he who is upon his hill” (Anubis guarding the necropolis)

Neb-ta-Djoser, “lord of the sacred land” (the actual necropolis

Khanty-vimentin, “foremost of the westerners” (first among the deceased)

Khanty-she-netjer, “lord of the god’s pavilion” (a symbol for the tent where mummification took place)

When the Greeks and, later, the Romans ruled Egypt, Anubis was worshipped as a cosmic deity who brought light to the people. Shown on the walls of the catacombs in Alexandria, Anubis appears in the garb of a Roman general while serving as the guardian of Osiris.

In second-century Rome, Anubis was described as he appeared in the Procession of Isis by the author Apuleius:

Immediately after these came the Deities conde- sending to walk upon human feet, the foremost among them rearing terrifically on high his dog’s head and neck—this messenger between heaven and hell displaying alternately a face black as night, and as golden as the day . . .

Anubis remained important as a guardian of the dead until the Christian era when mummification was outlawed.