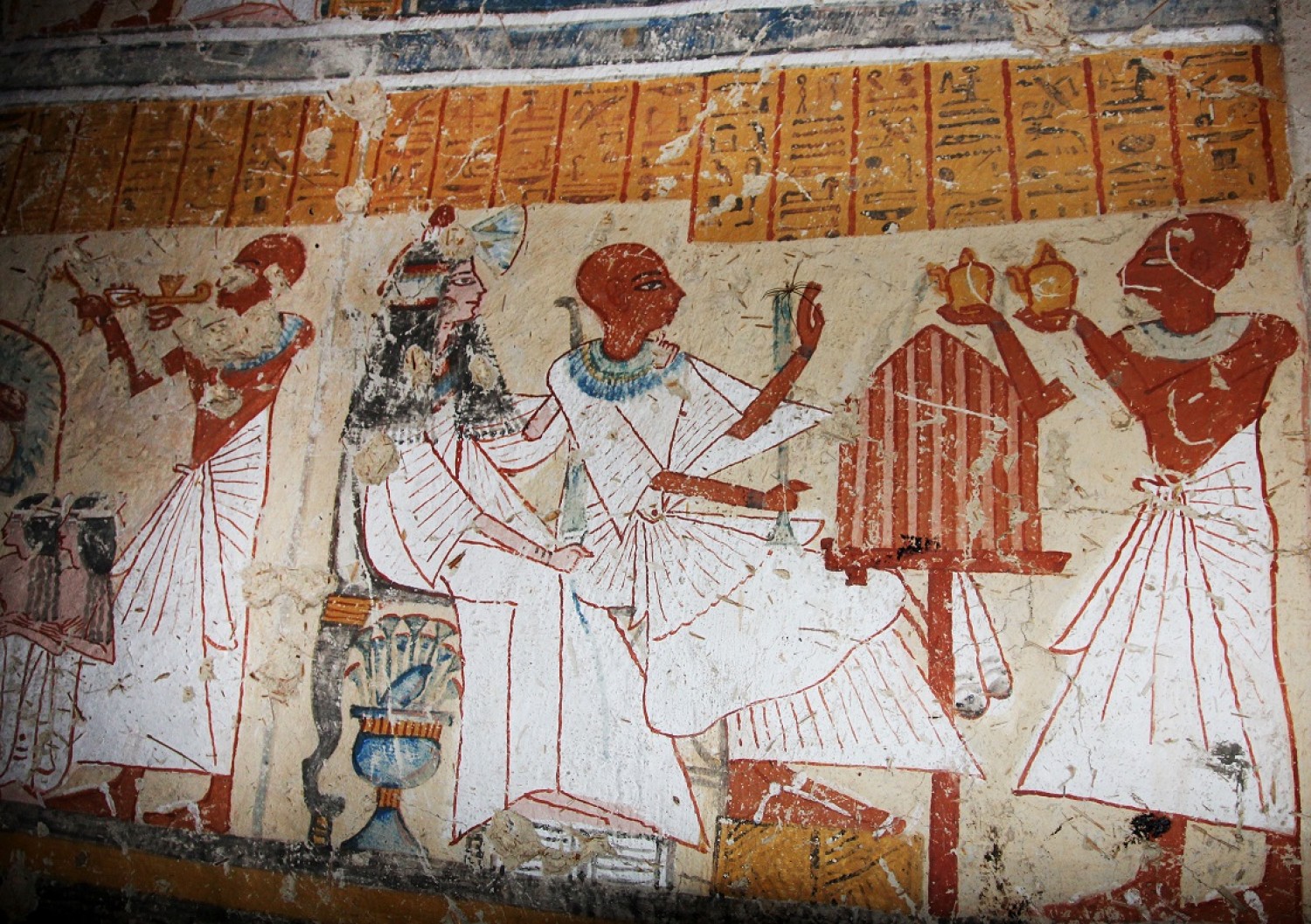 BEER The effects of drinking beer so delighted the Egyptians that beer and bread became a basic offering to the gods. Beer is generally believed to be an Egyptian invention, and every temple complex had a brewery and bakery that produced large quantities of bread and beer for the gods. Offerings were presented with great ceremony and were placed before

the shrine of each god. After an appropriate length of time, determined by the priests, the bread and beer were removed and consumed by the priests and work- ers in the temple. The PYRAMID TEXTS include prayers for the good life in the next world: “Let me live upon bread made of white grain and let my beer be made of red grain. . . .” We know that beer was just as important in the afterlife as it was for the living because offerings of beer are frequently painted on tomb walls.

Excavations near the Great Pyramid Complex on the Giza Plateau revealed that bakeries and breweries were placed next to each other because both bread and beer needed yeast as a key ingredient. The workmen who built the pyramids were often paid in bread, beer, and onions. Being a staple of life in ancient Egypt, beer was also given to children. The scribe Ani reminds a son to be kind to his mother for it was she who gave him bread and beer each day when he returned from his lessons.

While the chemistry of beer is complex, the Egyptians followed a simple recipe. Pans of damp, unmilled grain were left in the sun to germinate. The germinated grain was then crushed and became malt. The malt was mixed with crumbled bread made from coarse flour and soaked in a pot of water. The thickened mixture was then partially baked at a low temperature so the heat of the oven did not destroy the yeast. When the yeast in the half-baked bread fermented, the mixture was strained through a sieve, leaving beer of about 7 percent alcohol. Both barley and wheat were popular for brewing beer, and some- times the mixture was sweetened with date juice, or red dye was added for a special feast day.

Beer contains nutrients, and the antibacterial action of the alcohol made it safer to drink than water. Egyptian beer must have come in varying strengths, for tomb paintings frequently depict the results of overindulgence. The scribe Ani warned against visiting a house where beer was served by describing its effects:

Boast not that you can drink . . . a jug of beer. Thou speakest, and an unintelligible utterance issueth from thy mouth. If thou fallest down and thy limbs break there is no one to hold out a hand to thee. Thy companions in drink stand up and say, “Away with the sot.” If there cometh one to see thee to question thee, thou are found lying on the ground, and thou art like a child.