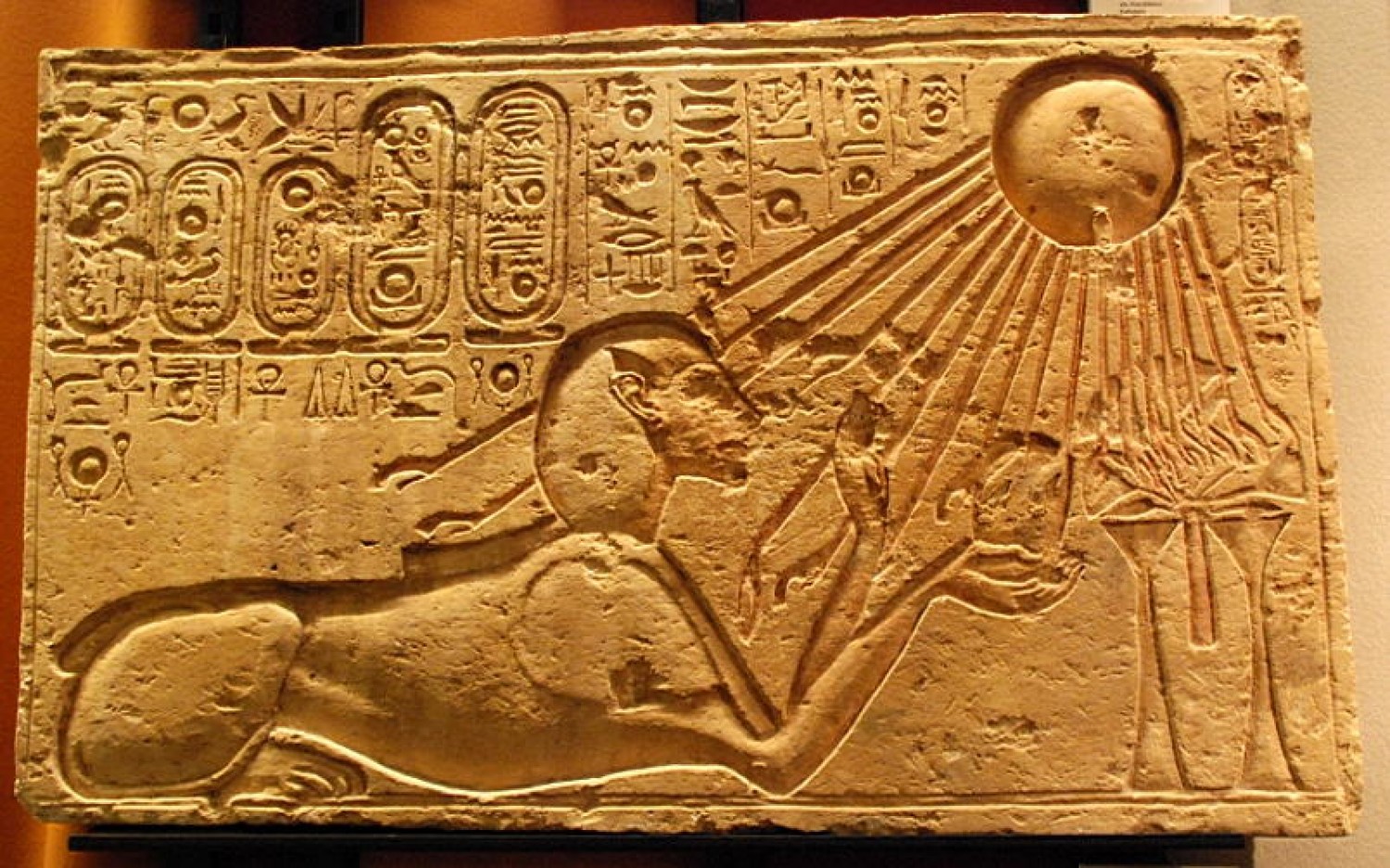 ATEN U was A sun-god worshipped by the pharaoh A51E2’TE2 when he changed the religion of Egypt. The Aten was symbolized by a sun disk with the sunbeams streaming down. The word aten means “disk,” and when written in hieroglyphs, it refers to the sun as an astronomical body. The origin of the Aten is uncertain, but it may have come from an early sun

cult in the city of Heliopolis. Queen Hatshepsut’s standing obelisk at Karnak Temple states that the gold and silver cap (electrum) on top of the obelisk would shine on Egypt like the “aten.” Hatshepsut’s father, Thutmose I, referred to the Aten as a god in an inscription carved during his Nubian campaigns.

The Aten was favored by Akhenaten’s father, Amenhotep III, who named a division of his army after the Aten and gave his wife, Queen Tiye, a pleasure boat called The Aten Gleams to sail on her private lake. It was not until Akhenaten became king, however, that the Aten became the supreme god in Egypt.

Per-Aten, the first temple dedicated to the Aten, was built at KARNAK next to the temple of Amun, the great god of Thebes. What the priests of Amun thought of the new temple is not known, but after Akhenaten’s reign, the temple was torn down. In the 1930s through the 1950s, archaeologists discovered 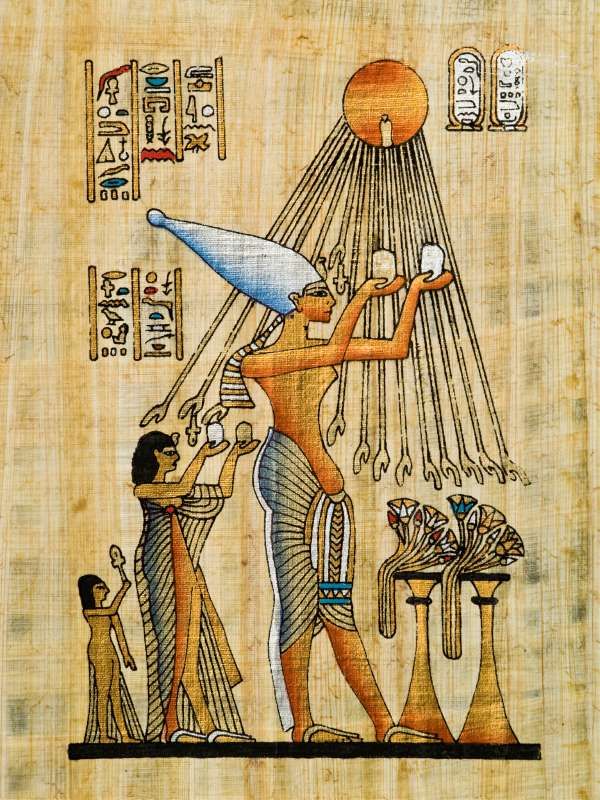 35,000 blocks from the dismantled Aten temple. The decorations on the blocks and the foundation sug- gested to Egyptologists that the Aten temple featured open courts with pillars, several sanctuaries, and colossal statues of Akhenaten. One area of the Aten temple called Gem-Pa-Aten, “finding the Aten,” was the domain of Queen Nefertiti and her daughters

Around year five of his reign, Akhenaten moved the royal court from Thebes to his new city dedicated to the Aten in the remote desert. The city was called Akhet-Aten, “the horizon of the Aten,” and included two major temples to the Aten: the Per-Aten (“house of the Aten”) and the Hwt-Aten (“mansion of the Aten”). Both temples featured the new open-air design with no enclosed rooms and with several offering tables placed around the courtyard. The Per-Aten, which Egyptologists call the Great Temple, was the larger of the two. Its first courtyard was called Per-Hay, “the house of rejoicing,” where the first light of the sun was greeted each day. As the sun rose, the worshippers moved into the second court, the Gem-Aten (“finding the Aten”), and made offerings. An inner courtyard was reserved for the royal family—Akhenaten, Nefertiti, and their children to make special offerings and perform the necessary rituals each day. Today nothing except the foundation remains of these temples, for they were demolished when Akhenaten was no longer king.

The essence of the Aten and Akhenaten’s beliefs is preserved in the HYMN  TO  THE ATEN  that was carved on the walls of the nobles’ tombs at Akhet- Aten. It states that the Aten is the only god, that he manifests himself in the sun’s rays, and that nighttime is to be feared. Fierce animals roam the land and danger is present when the Aten’s rays are not shining down. Under the beneficent rays of the sun, however, daily life proceeds, and all work is accomplished. All life comes through the Aten, and he protects all forms of life, none too insignificant for his attention. The peoples of the world are created in different colors and are given a different speech by the Aten, from whom all the beauty and bounty of nature come. The Aten cannot be understood by man and can be truly known only by his son, Akhenaten. The people cannot worship the Aten directly. Presumably, they worshipped Akhenaten, the son of the Aten.

Boundary stelae (carved stone tablets) erected when Akhenaten built his city in the desert tell us about the nature of the Aten.

The great and living Aten . . . ordaining life, vigorously alive, my Father . . . , my reminder of Eternity . . . who proclaims himself with his two hands, whom no craftsman has devised, who is established in the rising and setting each day ceaselessly . . . He fills the land with his rays and makes everyone live . . .

The phrase “whom no craftsman has devised” declared the Aten to be intangible; there could be no statues of him. The Aten was as elusive as the sun’s rays. This must have been disturbing to the Egyptian people, who were used to gods with the head of a cat and the body of a woman, or a man with the head of a jackal or an ibis.

The “Hymn to the Aten” says that the Aten is the only creator god and that he created not only the Egyptians but also all the peoples of the Earth. This, too, would have been a difficult concept for the Egyptians. If the Aten was the god of all people, then the Egyptians were no longer superior, and the old concept of Divine Order or MAAT, “the way the world should be,” was askew. Making war on their neighbors was no longer blessed by the gods, and life in the next world did not seem possible, for it was not clear if there was a NETHERWORLD. The teachings of the Aten were a curious mixture of humanitarianism and elitism, for the Aten shone only on the royal family.